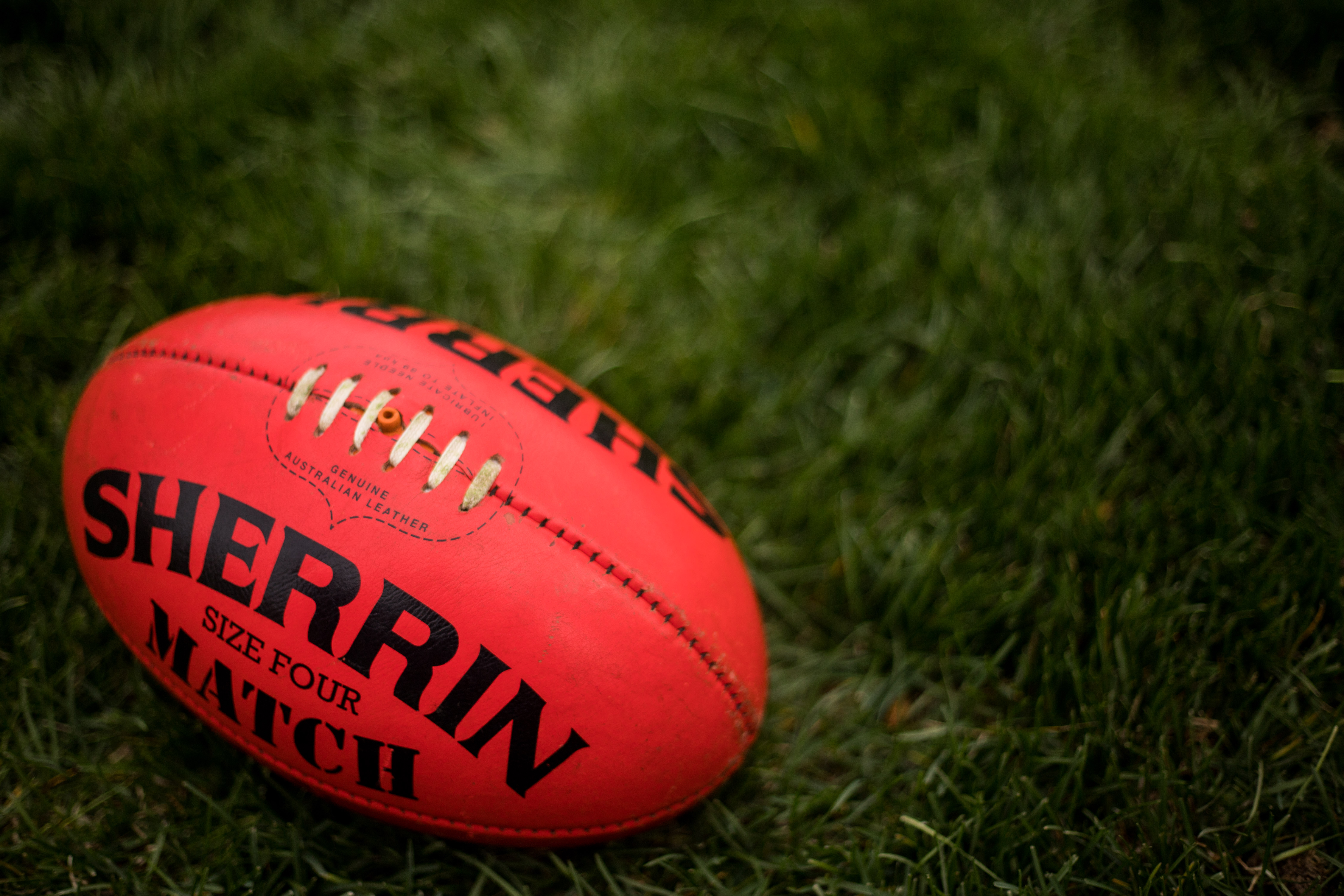 We are a team of talented women with a wide range of skills and experience. We love what we do, and we do it with passion.

Kayl eagerly joined the Tigers in 2021 after meeting some players at a recruiting event. Her youth and tenacity, coupled with a sporting background in wrestling and lacrosse, give her the aggression, fitness, and game awareness that help her to succeed in footy. Her positivity and desire to learn make Kayl an excellent teammate.

Member At-Large, Center Half Back

Carly is one of the most-talented center halfbacks in the nation. Although a Colorado native, she first learned about footy while living in Sacramento, California. Her experience in various sports such as soccer, volleyball, track, basketball and crew give her the hand up when reading the field, ensuring quick decision making and communicating to teammates. Her long booming kick is one to be envied. Carly is a founding member and current member at large.

Toria is a tall, all-around athlete. She began playing footy in 2019 and immediately took to the game like a natural. Her height and athletic background give her the advantage when contesting center bounces, boundary throw-ins and ball-ups in the ruck position. She is extremely coachable, eager, and an excellent addition to the Tigers. Toria will be one of many to help bring this team to the next level.

Andi’s love for Aussie Rules is contagious. She first learned about the game after meeting her now-husband (who is a native of Melbourne, Australia). Her true passion lies with playing live-action Quidditch, but she shares her love for competition with the footy crowd, too. Andi is a dedicated, responsible, hard-working teammate who focuses on honing her skills any chance she gets. She regularly crumbs for the ball in forward pocket and works hard every chance she gets.

Zoe, a native of Nomad Lands, cross trains harder than anyone, gaining endurance from biking, strength from CrossFit, balance from rock climbing, core strength from kayaking, and a good love for a tussle from MMA. She found Australian rules football in 2018 and pulls skills from every sport into the sport that is like none other. By day, Zoe works as a designer at IBM. By night, she attacks the football with singular focus and is not scared to put pressure on her opponents. When asked, “What drives you, Zoe Do?” She answers, “Discovering the unknowns.”

Connecticut-grown, college-rugby champ Ally Dykes lives life in hard pursuit of maximum potential—for herself, her humans and the world. She was named collegiate All-American in rugby, served for Peace Corps in The Gambia and paid her athletic skills forward to Life University’s women’s rugby team as grad assistant coach. A talented, laser-focused athlete, Ally learned to kick a footy, handball and even bounce almost immediately and can play forward and back interchangeably, unarguably the hottest player on ground. Ally balances hitting her targets and hitting the books working toward a master’s in positive psychology. For every tackle this season, Ally is tackling the oppression of trans women and girls in sport by donating to Athlete Ally and invites you to join her campaign.

Sara is a veteran of the sport, playing internationally for the USA Freedom and training with several AFLW teams, including the Western Bulldogs, Collingwood Magpies and Gold Coast Suns. Her athletic background includes soccer and international 7s and 15s rugby union. Sara founded the Centennial Tigers. She gets the utmost satisfaction from watching women transform through empowerment. Sara is the current president.
Listen to Sara’s interview on ABC Radio Melbourne’s Coodabeen Champions

Milwaukee-made and town-renowned for holding the city record for 500-meter front stroke four years running, Esther spent two decades slicing water for the fastest split, winning multiple high school records and collecting 3rd in state. On dry land, she picked up rugby in college and found footy not long after. Coach loves her determination, keen ear and teachable intelligence at practice, and on field, she is skilled at picking up the other teams’ small forwards and taking them out. She’s one of six at home, twin to the mother of one of her nieces and nephews, and she lives the mantra tattooed in blue on her right forearm: “You don’t become poor by giving.” A zookeeper for seven years, Esther keeps her own small family of animals: a pig “Peppa,” three cats and a hamster, “Harry.”

Caitlin is brand-new to grass sports, but her ability to drop punt, mark, and use space are undeniably natural. Caitlin spent her youth participating in competitive swimming, but has since easily picked up the nuances of footy. She is a dedicated and enthusiastic teammate who isn’t shy to use her height to her advantage.

You need Rachel’s 15 years of volleyball experience to handpass like she does, but her bombing kick is even better. She found footy in 2021, and now her two-foot-tall sidekick and team darling, Elom, watches his mum drill the skills at practice that make her a great target as a deep forward. By trade, Rachel works as a pre-construction manager, but her lifelong career is in domestic engineering: the career that trains the next generation. Her sports advice to lil’ Elom: “Have fun, bond with your team, and if you want to be really good at a sport, practice, practice, practice.”

Krystal is a member of the U.S. Air Force and former basketball player. Her fitness, athleticism and fearlessness will make her an excellent crummer in the Tigers’ midfield. She’s fierce and will make a huge impact on the Tigers lineup.

If there is one thing that lights a fire under Hayley’s calm exterior, it’s games. On a tabletop board or a turf field, Hayley is a master strategist and competitive Category B. On the oval she’s smart, surprisingly strong and beats her opponent to the ball every time. Her curriculum vitae includes soccer, snowboarding, bowling and golf. Throw in Dominion, Euchre and the NASA Robotic Mining Competition to round out the cerebral sports, and you’ve got a girl who can outplay and outwit anyone, including her Garfield-sized feline, Monty. From 9 to 5, she writes code, but when work is done, watch out. Too late. She’s already won.

Forward, Back and Midfield (Utility Player)

Denver-born Taryn is as smart and powerful as her brindle Great Dane, Max, who cheers her on from the sideline at every game. Her two-steps-ahead, 360-degree agility comes from 8 years playing basketball, followed by rugby, followed by Australian Rules Football. She reads the play exceptionally well—front, back and midfield—and attacks the ball with no hesitation. Her athletic talent was spotted at the South Suburban Sports Complex in 2021, and she was drafted by the Tigers that same day. If she could be famous, she has no idea how, but Coach believes she’ll become famous playing sport (or being a librarian).

Faller by day, baller by night, Raquel “Rookie” Lucero from Cortez, Colorado, can draw and work a crowd. She’s clever on and off ground, calculating the play long before her opponents and sends the stands roaring at even the smallest house party. Raquel outmaneuvers the opposition or mows them down, thanks to tricks from nine years of tennis and three of rugby. By day, she is a project engineer for a local construction company, by night, she assembles puzzles with her cat, Gahiji. It could only be this moxie and good-looking brains that inspire her teammates to forever rag her for scoring a goal for the opposition. As Raquel would say, “In the wise words of Hannah Montana, ‘Everybody makes mistakes.'” Some will never be forgotten.

If Deja could bring one fashion statement back, she’d bring the baggy baseball shirts and cute basketball jerseys–comfy yet fashionable–and for this player, a fashion staple in her 13 years playing basketball, volleyball, soccer, baseball, softball, rugby and lacrosse. An artist in two-dimensional mediums, she is an artist on the oval as well. Her low center-of-gravity lets her play quick, like a hockey puck, and she has the tenacity to play on the inside, clearing the ball outside the stoppage like she was born in Melbourne, not Denver. She quotes to players she coaches: “In a world where you can be anything, be kind.” Her footy teammates, on the other hand, prefer to quote Daynjah: “If you hate me, it’s probably because you were the butt-end of a joke.”

Tami comes from a competitive, athletic background mostly consisting of volleyball. Her height, athleticism and desire to compete translate well to Australian rules football. She is a devoted teammate who isn’t afraid to take risks. Tami encompasses what it means to be a Tiger, and we are so glad she is part of our tribe.

Joliet “Baby J” Moya is one of the Tigers’ younger athletes. She was a star basketball player in high school, and her athleticism shows on the oval. Joliet protects her fellow on-ballers and never hesitates to throw a good hit on someone. She is an excellent crumber and regularly takes high marks. Joliet is a loyal teammate, and her comic relief always makes for a good time on and off the field.
Read Baby J’s Essay Here.

Amanda dabbled in sports throughout her life, including soccer and rugby into her teenage years. She started playing footy in 2018 and has found her home in the back pocket. Her strength and a solid boot keep the Tigers out of trouble on defense. She never gives up and works hard to crumb in the backline. Amanda is a founding member of the club and current secretary.
Read Amanda’s Essay Here.

E embodies everything the Tigers represent, especially her tenacious outlook on life, football and the club. She immerses herself 100% into everything she sets out to do. Whether it’s being the top-rated female grappler in the U.S. (2007), running as a tagger in her first footy game ever or dedicating her time to the community, she’s someone you want on your side–and we’re pumped to have her running circles around our competition. When she’s not getting ripped or eating snacks, she crushing it in the technical writing world by cranking out that literature.

A former Vassar varsity basketball captain, Kim uses her vertical, positivity, and quick feet to lead the Tigers on the oval. She’s a natural in the air, and her drop punt is to be envied. Kim is an all-around amazing person and teammate, and we can’t wait to use her multitude of skills this season!

Erin kicks goals out of nowhere. On defense, she smothers the ball out of nowhere, leaving only the lash of the longest blondest ponytail on the team. But don’t let her hot pink nails deceive, as the mom of three boys and a former softball and rugby player, she is a human jungle gym at home and a physical beast on the oval. Once, she broke her right ankle so bad, the doc could barely bare the sight. She recovered, stronger than ever, and now nothing makes her squirm, including the poop from the six chickens she raises out back: Sunny, Buffy, Foxy, Goldie, Rocky, and Barbie. Erin hails from Shenandoah, Iowa, and when not kicking goals or tossing feed, you’ll find her at a PTA meeting or her boys’ soccer practice.

Tag is a recent graduate from the Colorado School of Mines where she played rugby for the university. In addition to rugby, Tag plays ice hockey. She’s no stranger to full-contact sports. Her athletic physique and fearlessness will make her a threat on the oval.

Want to join us?

©️2022 Material displayed on this website is not to be used without permission from the Centennial Tigers Australian Rules Football Club.